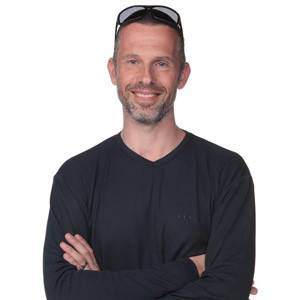 Hol grew up with the bike and was an elite rider for three years. He became involved with the inline and speedskating world through his graduation assignment (TU Delft) at Raps, at the time of the introduction of the clap skate.

Work had been started on the clap skate since the 1980s, but the skating world was not ready for a radical change. The University of Amsterdam therefore worked with a group of juniors to prove this innovation, which ultimately heralded the breakthrough of the clap skate in the late 1990s. Hol was involved from the beginning in the development of these first skates. This big change in skating triggered him in such a way that he developed a love for ice and inline skating.

He was entitled to work at Raps on the first skates, the Raps Axel and the Raps Rotrax. The Rotrax was a groundbreaking design in which the natural motion of walking and jumping was simulated by a 7 hinge mechanism lengthened the push-off stroke by 1.5 cm. Supported by scientific evidence, but: "I have had to learn that you have to introduce innovations at the right time. This came too soon after the introduction of the clap skate and the change was too big. "

Innovation in top sport remained the ultimate trigger for Hol. He became general manager at Mogema, where he had to work on a completely new inline frame because of patents from other brands. The result was the Dual Box design, a skate frame with double side wall. The design has been around the world since 1999 and is still seen as the most innovative design in inline skating. At Mogema he also developed the NSX clap skate.

In 2006 he started his own company, Cádo Motus. "I have come to know the beauty of the skating movement and I have come to love it. My mission is to make the sport more accessible by making innovative products in which design, function and quality unite. "

The Cádomotus Record clap skate is an example of this. "Instead of doing what everyone else does, I look for new ways." The way in which skating tubes are made has been the same for decades. The Record is a clap skate where the attachment of the knife to the tube is completely different. A method in which steel is not bent under high temperatures, as a result of which the steel continues to behave much more predictably and better. "An innovation that makes skating easier and faster." In the last few years, world titles were won in long-distance skating and weekly prizes are won in marathon skating.

Recently he worked on the first specific skate helmet for marathon skaters. After a series of incidents in marathon skating, a helmet obligation followed. A development that Hol had pre-sorted on. He developed the Cádomotus Alpha and the Cádomotus Omega, helmets that meet the ISU quality marks and, according to a completely new design, suit the wishes of skaters.