This is part two about the differences between inline skate and speed skate boots. Because we are getting a lot of questions from customers who want to use their inline boots for speed skating, we dive a bit deeper into this subject. It seems like you can ride and glide with the same boots, but using one pair of boots for two seasons? That won’t work, unfortunately.

In a former blog post, we explained why that’s technically not possible. Now we are looking at the differences in functionality.

What inline skating distinguishes from speed skating are three things. Firstly, there is a difference in temperature between summer and winter. Warmth has an impact on the volume of your foot and demands different specifications of materials of the boot, such as ventilation. Secondly, the surface: rough versatile roads versus smooth ice. Inline skating demands more stability around the ankles, while speed skating requires a precise feel for the ice. And third, the race format. Speed skating is mostly an individual sport, while inline skating takes place in a group, a peloton. That is one of the reasons why your body position on inline skates is higher up than in speed skating, where you have a more crouched position. That will also demand different features of a boot.

You can read below why that is.

Image 1: A speed skater has a significantly lower body position than an inline skater. This gives a speed skater an aerodynamic advantage plus a longer, effective push-off. Inline skaters don’t have the possibility to extend their push-off. You can read more about this at the end of this blog.

Do you remember how speed skaters went into the corners on their leather shoes? It is hard to imagine nowadays. All top skaters are using carbon boots now, something that is common a while longer in inline skating. There are differences though.

That has to with the moldability. In both sports you want your boots to have a snug fit around your foot. Boots are therefore mouldable and made with a thermoplastic resin in the sole of the boots. You put your boots in the oven and around at 70 degrees Celcius the carbon base becomes soft, and you can take them out. You put them on your feet, the carbon base sole will accommodate to your feet, and let them cool off. There is an extra challenge with inline skate boots. The thermoplastic resin doesn’t have an ‘on and off’ switch. It is a gradual chemical process that starts with temperatures under 70 degrees. Your shoes are getting softer at a 40-degree temperature, so you can’t use them in the summer. Next to the fact that your boots are giving you less support, you also have the risk that the sole will bend or that the attachment will get torn out of the carbon.

The inline skate boot must have the ability to mould at higher temperatures. But that will sacrifice other parts of the shoe. Glue joints and plastic mounting parts will damage, etc. Bottom line is that inline skate boots are less mouldable than speed skate boots.

Feel for the ice

This is good news for speed skaters. Gliding on the ice asks a lot of your ability to 'read' the ice. Where do I place my feet, when do I push off? You will need that with inline skating as well, but speed skating demands a little bit more of that skill. That’s why the snug fit is so important. Back in the days, we thought we could establish a snug fit just by wearing our speed skates a size too small. Now we know that your shoe has to have a snug fit all around the foot.

There is another important difference. Inline skate boots have an extremely strong and rigid sole to be able to take the hits when you are skating on rough surfaces. Most of the speed skating boots have a less rigid sole because through the sole you can develop your feel for the ice. Some manufacturers choose to split the sole into two parts: the forefoot and the heel. This way there is a flex that gives a sense of control. We are not a fan of that idea. We think it is a false sense of control. The sole has to be in one piece for maximum power transmission and predictability. The speed skate boot has a bit more flexibility than the inline skate to increase the freedom of movement.

The earlier mentioned rough road surfaces and the fact that inline skating is a group sport makes a huge difference. Going fast, slow, sprinting, accelerating, jumping over road obstacles. The inline skate boot is stiffer and often a bit higher than a speed skate boot. And not without reason. Also because we ride on bigger wheels and we’re about 15mm higher up.

Image 3: On inline skates, you are standing significantly higher the than on ice blades. The difference has increased a lot with the development of larger inline wheels.

A speed skater glides easily over a smooth ice floor. And on average has a more crouched body position. That has several reasons. You’re not riding in a group, so when you have a lower body position you’ll be more aerodynamic. Did you know that 80 percent of the resistance in skating is air-resistance? When you skate in a group you can’t make a lot of difference with aerodynamics. That’s why your body position can be higher and you can spare your legs and back for the moments that count: when you have to accelerate and sprint!

You can find the aerodynamics also in the design of the shoe. Speed skates have a sleek design, the design of inline skates is more focused on ventilation because of the higher temperatures in summer. Ventilation and aerodynamics, it is a challenging combination.

Your body position and building pressure during speed skating

Speed skating is a sport in which you slowly build up pressure in your push-off. The lower your body position, the longer you can stretch out and the more speed you can develop. You don’t build up the pressure like that on inline skates. At the end of your push-off, because the wheels don’t have grip anymore. You have to generate your speed early in the push-off. For the experts: that’s how the famous ‘double push’ was established. A low body position is less useful and the inline skate push-off is more dynamic (scroll down for a more detailed explanation) in stead of static.

Image 4: When you have a low body position, you will lock your ankles and have more stability.

Why do we mention this? A low body position will lock your ankle automatically. That’s why your speed skate shoe is a bit lower around the ankle. You need less support compared to inline skating and you also need the room to establish a low body position.

Image 5: Because of the bigger wheels you’re higher up from the ground and you have a higher body position. To establish enough stability, inline skate boots are higher around the ankle and more rigid.

It is not a sales pitch, but there is no other way: the best option is to use different boots for those two sports.

What you need for ice speed skating and inline-skating is grip. Without grip, you will glide in every direction and it is hard to move forward. Anyone who tried to skate on inlines in the rain knows how that feels. You have grip when there is friction between the PU of the inline skate wheel and the surface you’re on.

On ice speed skates, you push off against a solid surface because the speed skate carves into the ice. When you are straight up on your skates (like in the gliding-phase), you have no grip because you stand on the ice. When you start to push off, your blade starts carving and you get more grip!

On inline skates, it works the opposite. You have the most grip when you are straight up. When you push off you lose grip when you stretch out too far. This happens because your push-off force is bigger than the force of friction.

Image 6: The horizontal component F(x) of the push-off force is limited because this depends on the friction between the road surface and the inline-skate wheel.

Afbeelding 7: Left - An ice blade carves into the ice, this allows you to push against a solid surface. Your 'grip' increases during the push. On inlines - Right - there is a limitation caused by the maximum friction between the road and the inline wheel.

Because of the physical differences, the push-off in inline skating is shorter and your body position higher than when you’re speed skating. That’s the main reason why inline skate boots are different from speed skates. 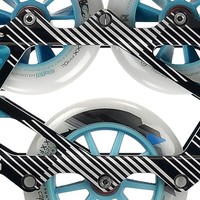 Dualbox 6: The inline frames you will love | Testimonial 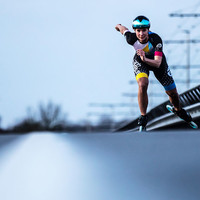 5 reasons why inline skating is the perfect cross-training for runners, cyclists and triathletes 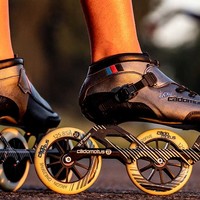 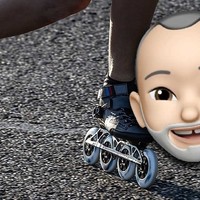 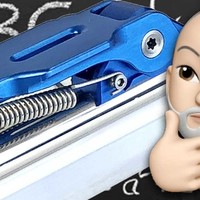 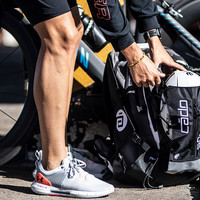 Why every cyclist should have a Cádomotus Race Day Gear Bag 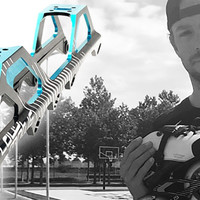 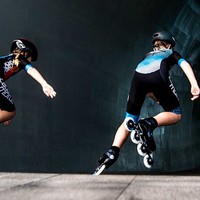 The Cádomotus Rookie Inline Skate gives you confidence and fun 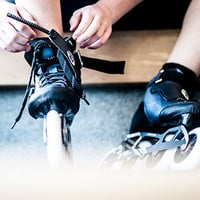 Why you learn quick how to skate faster on our Rookie skates! 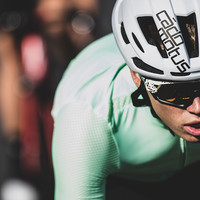