“I like to investigate things”, says Hans Gijsen modestly. Over the years, this kind of research has made the friendly Dutchman a beloved source of information and equipment expert of world-class athletes. Thanks to his scientific approach, he knows how to get the best skating experience out of any kind of speed skating blade and he has more insight than anyone else in how to put the science behind skating blades into practice, in the best way. “I have measured and collected data of most of the speed skates that have been made. I know how they behave and how they distinguish from each other."

His analysis of the skating blades that are currently used by world-class athletes is remarkable. “Actually, it's crazy that those skates look so similar: almost all of them have a round, or almost round, tube and that tube is 15 millimeters in diameter. There are few deviations,” he says with an almost apologetic smile. It is a striking statement of the man who once helped to develop the famous blue Viking blade, the Sapphire. “Of course there are very small differences,” he continues. “If you get such a skate laser-welded by different companies there will undoubtedly be differences in how it is done. A few things are very important for the quality of a skate: how the skate is made, but also the consistency in the process, the quality control. You really have to look at the details: How the skate bends in a lateral direction at the hinge point by example. That means transversely to the ice. Some types of blades bend more than others. But the majority of the measuring values I collect are almost the same.”

The Pressure versus the Sapphire

He compared a whole range of ice skating blades in the past and recently tested Cadomotus' new showpiece, the Pressure. He was pleasantly surprised. “It's definitely as good as the Sapphire and the Maple. It's at least as good and might even be better," he says. “I don't know the exact properties of that dual-phase steel, but it is very strong and very elastic. And that's what you want: The skate needs to keep its shape after putting a strain on it. Thats all the blade needs to do.” That's what a skate made of strong material does: it keeps its shape.

Gijsen compares it to a bridge over which an overweight truck drives. “That bridge just deforms temporarily, but it won't break. It doesn't collaps. Due to the elasticity of the steel, it simply sinks in. When that truck is in the middle of the bridge, the bridge will sink to the deepest point. And as the truck moves on, the bridge rises again. A bridge of strong steel will come back exactly as it was. But if the steel is not strong enough, it will remain a bit slumped. That's the difference and that's all. It's the same with a skate: it should actually bounce back the way it was.”

“That metal seems static, but is actually elastic,” he continues. “I worked on that blue skate at Viking, with that in mind. If you put the Nagano's in a bender and you push a little bit, it's already bent. After the Nagano the Maple came, as a good alternative. You had to put a lot more weight on it, to change the form. Once it was bent, it stayed that way. Sometimes for months. That is better, because then you have a constant quality in your skates.”

He explains that almost every skate has light pendulums in the blade when it comes straight from the factory. To be able to test properly, Gijsen straightens them first. But straightening the "Pressure" it wasn't easy, he says. “I got that skate here, I wanted to straighten it and almost couldn't manage to, because it is really strong”, he says with surprise in his voice. At one point I even thought I wouldn't get it done. I had two blades and had tried them both. I just didn't get it right. There was a wave in there. I wanted to push it back and straighten it, but I couldn't do it."

Gijsen is not one to just give up and explained the problem to Jeremy Wotherspoon. “He had also been given a test model.” says Gijsen. The Canadian former top sprinter knew what to do with it. “'Ah," says Jeremy. 'You shouldn't be so hard on that. You just have to put the blocks of that bender higher, then you can push deeper'. And so I did. I had some blocks that were higher and I put them in the bender and tried again. Then it worked. I had to put all my body weight onto it and push really hard to get it done", he says with a big smile. “I had sore arms the next day. The Icon, you have to be careful with. But this one... You have to push really hard, its not good for your back.” Gijsen pretends to be hanging on the bender with his whole body.

Like the strong metal bridge in the example, the Pressure then bounced back almost perfectly. “I measured it in the middle and several other points. Then you get values of how much it bends and a gradient.” Gijsen shows the graphs below, which show a striking resemblance of the Pressure to the Sapphire. “It's a good skate, that Pressure. It is very similar to the Sapphire and the earlier Maple from a measurement point of view.” 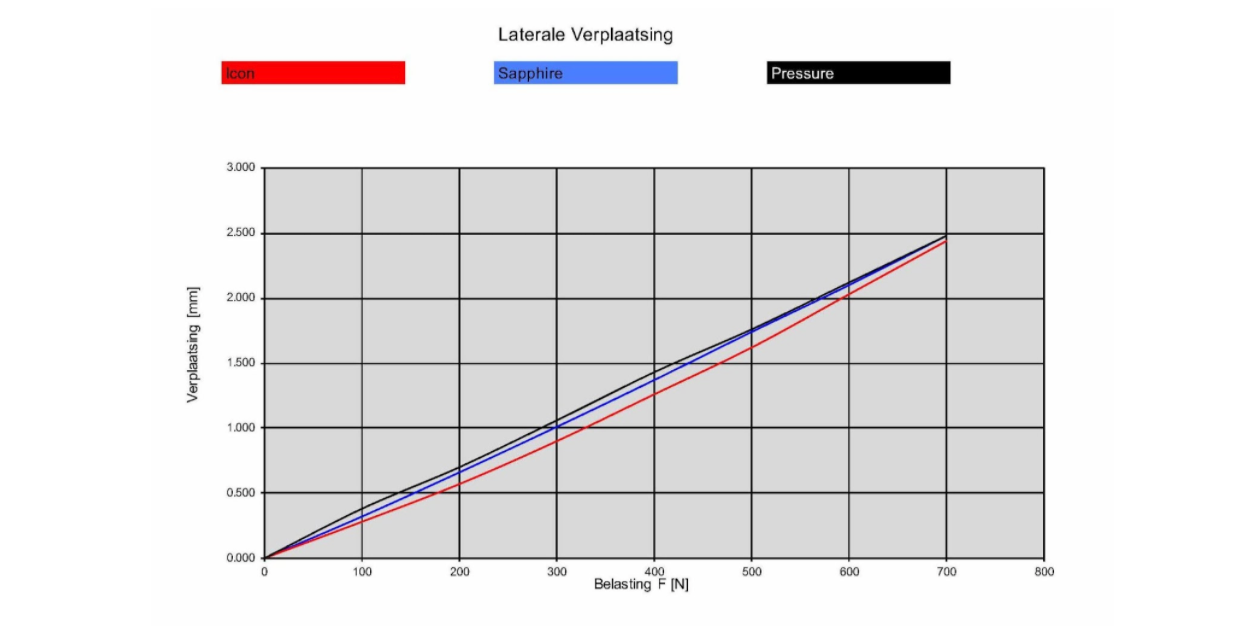 Force measured in lateral or axial direction. The bottom of the skating blade bends outwards and that determines whether you are feeling much or little pressure. 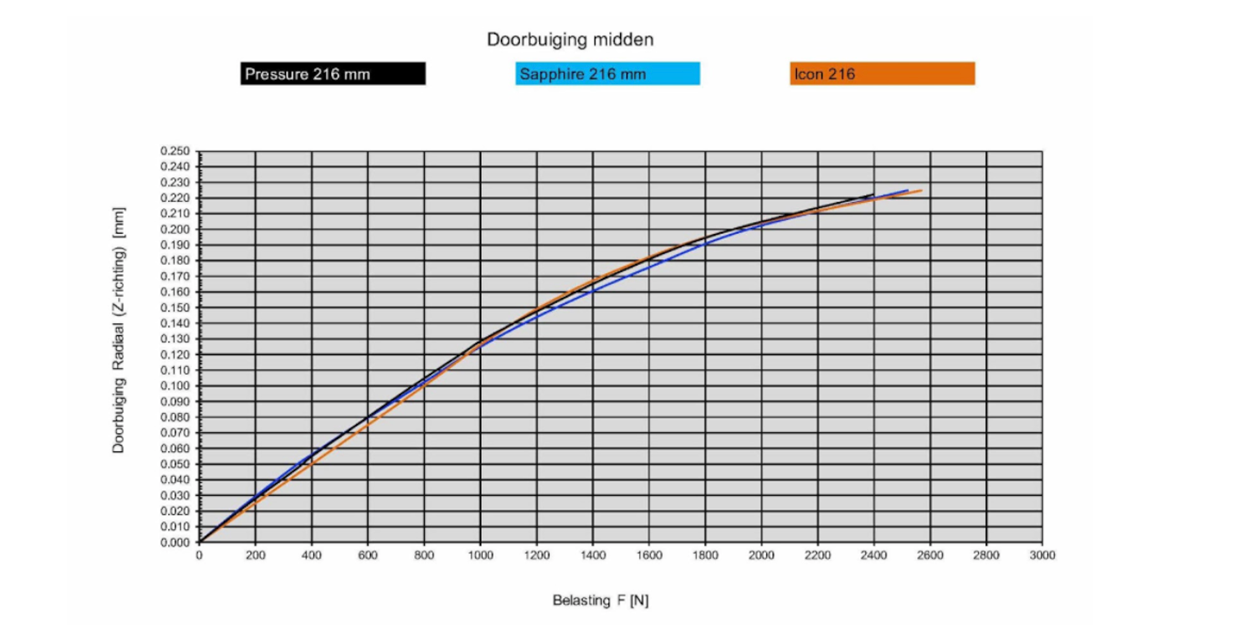 We split the power on a skate into two components; in the direction of the blade and perpendicular to it. At right angles to the blade we call the lateral (or axial) direction. The other direction is the radial direction. Radial changes the rocker, see previous blog. Axial means that the skate bends to the side and therefore produces more or less pressure.

Comparison between the Pressure, the Sapphire and the Icon.

Read here how this measurement came about.

“Compare the Pressure to the Sapphire or a Maple, they just look very much alike”, is his conclusion. In Gijsen's opinion, the fact that skaters feel great differences despite the great similarities has more to do with a number of preconditions than with the blades themselves. “People who test a new skate feel that this skate is not quite the same. That usually depends on the dimensions, rocker, sharpness, profile height, attachment points under the shoe, all of these variables can be different from what they are used to. Skaters don't believe that when you tell them. They feel different, but skaters can't say what exactly is different. And it turns out: this skate is completely different than the one they used to skate on. Their own blade has another rocker and has been sharpened. So the rocker has changed over time and the blade is not the same height anymore. That's what they feel.” That change has a greater influence than the properties of the new skate.”

Want to know more? Hans wrote the book "The rocker and the bend." (The Competition Skate) in which he explains in detail what the necessary characteristics of a competition skate are.