Is 3x125 the next generation inline speedskate setup?

Spectators at this year's Roller Speed Skating World Championships in Oostende, Belgium were surprised to see the unveiling of a new inline speed skate setup, a 3x125 millimeter wheel, frame, boot combination. Tests were done on and off the track, with results being something that not too many were open to discussing. What does this mean? It means we're on the verge of something new. Again. It's happened before. And we can speculate on how this could roll out, but this much is known for certain, we know a few good speedskaters raced the Duluth and Berlin marathons with this type of setup, so we know it's feasible. But we know the development curve on something like this takes time and testing. There are many factors at play, not the least of which being physics and bio-mechanics. That and too, we know that at this point, super size 125mm wheels are not allowed in official races.

A recreational speed skate only?

With the 110mm limitation firmly in place, it will be through recreational events that this platform will evolve. But it's not where you'd see early adoption. That's where the pros will come in, because even though recreational skaters can use any size wheel that they want, it's the pros that have a vested interest in pushing the limits of the technology. But that's a very narrow niche to consider when thinking of the investment in tools and technology to facilitate mass-production. Will there be a bigger market for this innovation? Are recreational skaters waiting for this, and would they be willing to pay for it?

Most of the novice and recreational market just got through the 110mm upgrade within the last year and a half to two years, and those that haven't moved on from 100mm, a significant number, what of them? Will it be as easy from someone to move up from 100mm to 125mm as it was to move from 100mm to 110mm? That's an interesting question.

To explore this, consider the illustrations below: we show that a 3x125mm setup would automatically result in a boot that is about 10mm higher above the road (if wheels are placed with equal wheel spacing in a frame) compared to a 4x110mm setup. This might be alright for top skaters with high skills, but probably not for the average recreational skater and race participant. Consider the impact on form and the additional weight that would come from a set-up like this. That could be a road block for some, no question. And would the difference in top-end speed be enough to convince someone to invest in retraining? 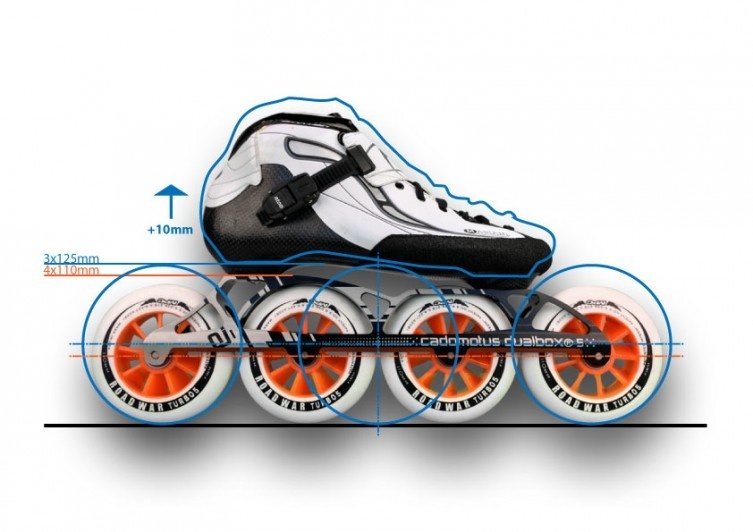 On the fitness side, we can see distinct possibilities from challenges such as these. If the race-boot would be redesigned with a higher cuff for example, such as you find on latest Pro-Nordic skiing boots for skating style, it could also be a adopted by fitness skaters with relative ease. Here, having to accommodate extra weight is not necessarily a bad thing, and the extra work it will require to achieve top speed will make for a more intense workout.
But really, all of this is speculation. For now, its clear that to accommodate innovation, FIRS rules are going to need to change, replacing the maximum wheels size requirement with one that's measured for maximum skate length and height. If FIRS can do this, it would open the door for new concepts with larger wheels sizes and different combinations of wheels and sizes on the professional World stage. We'd like to see that happen, in the interest of science, innovation and pure speed skating. Does faster top-end speed help the market as a whole grow? Is this an innovation that's one-stride too far? What do you think? Comment and share! 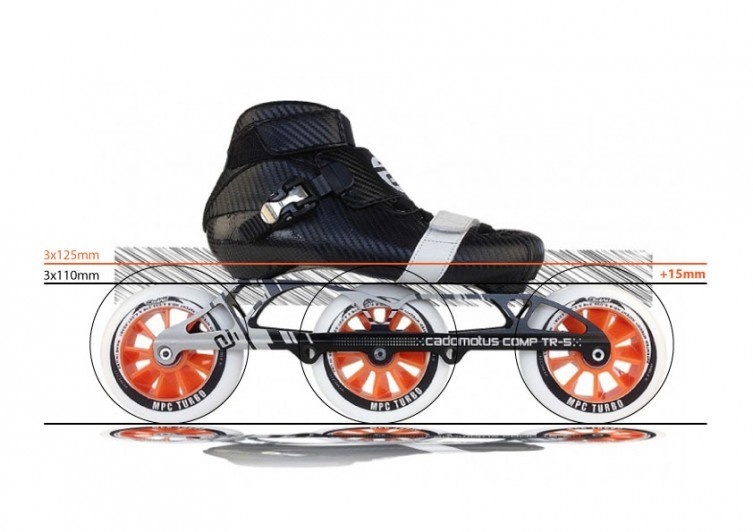